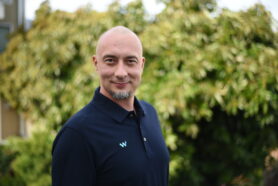 Machine learning is key to developing a self-driving stack that can scale to a diverse set of environments without requiring exhaustive manual labeling or expert tuning. To enable relevant research in the academic community, we created the Waymo Open Dataset: a large and high quality camera and lidar dataset capturing a diverse set of real world scenes and conditions. In this talk, I will describe in detail the dataset and the recently completed Challenges, as well as some of the recent modeling work at Waymo that aims to capture better the inherent structure in the autonomous driving domain. I will also describe some of our work on some exciting new research directions, such as self-supervision of perception models and data-driven approaches for sensor simulation.

Drago Anguelov is the principal scientist and head of research at Waymo. Drago joined Waymo in 2018 to lead the Research team, which focuses on developing the state of the art in autonomous driving using machine learning. Drago spent eight years at Google; first working on 3D vision and pose estimation for StreetView, and later leading a research team which developed computer vision systems for annotating Google Photos. The team also invented popular methods such as the Inception neural network architecture, and the SSD detector, which helped win the Imagenet 2014 Classification and Detection challenges. Before Waymo, Drago led the 3D Perception team at Zoox. 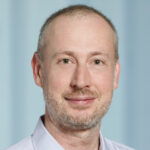 Information Technology has the potential to challenge traditional paradigms of construction: the digitalization of architecture allows redefining the relationship between geometry, material and fabrication, and the role of architect and computer within the design process. The strategic combination of computational design and robotic manufacturing, such as large-format 3D printing, can pave the way towards a more sustainable and more diverse built environment – a new digital building culture.

Benjamin Dillenburger is an architect who explores computational design methods and digital fabrication to broaden the design freedom for architecture and to develop performative and sustainable building solutions.  Benjamin Dillenburger’s work was presented in venues like the Venice Architecture Biennale, London Design Week, and Art Basel Miami. Recent projects include the design of two full-scale 3D printed rooms for the FRAC Centre Orleans and the permanent collection of Centre Pompidou Paris and the development of a lightweight concrete slab, as part of the DFAB HOUSE, a housing project entirely fabricated with robots and 3D printers. Benjamin Dillenburger holds a Ph.D. and a Master of Advanced Studies degree from the ETH Zurich. He previously taught as Assistant Professor at the John H. Daniels Faculty of Architecture. He is currently heading the Digital Building Technologies Research Group at ETH Zurich and Principal Investigator of the Swiss National Centre of Competence in Research Digital Fabrication. 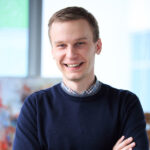 Finding and exploring detailed relations that exist among non-rigid 3D shapes remains one of the major challenges in geometric data analysis. In this talk I will describe recent approaches for computing dense correspondences, as well as comparing and interpolating 3D shapes. A key question in these problems is the appropriate choice of geometric structure that can enable efficient comparison. I will discuss methods based both on functional maps and on learned latent spaces that lead to remarkably simple and robust algorithms almost entirely through an appropriate choice of embedding space and metric on it. I will finish with some ongoing work and future directions based on these ideas.

Maks Ovsjanikov is a Professor at Ecole Polytechnique in France. He works on 3D shape analysis with emphasis on shape matching and correspondence. He has received a Eurographics Young Researcher Award in 2014 “in recognition of his outstanding contributions to theoretical foundations of non-rigid shape matching”. He has served on the technical program committees of international conferences including SIGGRAPH and SIGGRAPH Asia, as a member of the editorial board of Computer Graphics Forum and has co-chaired the Symposium on Geometry Processing in 2016. In 2017 he received an ERC Starting Grant from the European Commission and a Bronze Medal from the French National Center for Scientific Research (CNRS) for research contributions in Computer Science in 2018. 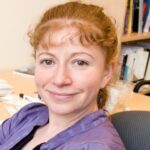 Humans can ubiquitously communicate and reason about both tangible and abstract shape properties. Artists can succinctly convey complex shapes to a broad audience using a range of mediums; and human observers can effortlessly analyze and agree on observed shape properties such as upright-orientation or style. While perception research provides some clues as to the mental processes humans employ when performing these tasks, concrete and quantifiable explanations of these actions are frequently lacking. Our recent research aims to quantify the geometric properties underlying human shape communication and analysis, and to develop algorithms that successfully replicate human abilities in these domains. In my talk I will survey our efforts in this space, focusing on ways to incorporate insights about human perception into  algorithm design.  My talk will include examples across a wide range of 2D and 3D geometry processing tasks, including shape orientation, VR interfaces for shape modeling, raw sketch consolidation;  clip-art vectorization; image-based 3D reconstruction; and style analysis and transfer for man-made shapes. The common thread in our proposed solutions to these problems is the use of insights derived from perception and design literature combined with derivation of quantitative properties via targeted human perception studies.

Alla Sheffer is a professor of Computer Science at the University of British Columbia, where she investigates algorithms for shape modeling and analysis in the context of computer graphics applications. She is best known for her research on mesh parameterization, hexahedral meshing, computational garment design, and perception driven shape modeling. Dr. Sheffer is a member of SIGGRAPH Academy since 2020, the recipient of the Canadian Human Computer Communications Society Achievement Award’18 a UBC Killam Research Award’19, and an Audi Production Award. Her research has been supported by faculty awards from IBM, Google and Adobe, Discovery, Discovery Accelerator and I2I NSERC grants, and a Killam Research Fellowship. Dr. Sheffer has served as an Associate Editor of the three major computer graphics journals (ACM Transactions on Graphics, IEEE Transactions on Visualization Computer Graphics, and Eurographics Computer Graphics Forum). She served as a program co-chair for Eurographics’18, Symposium on Geometry Processing’06, and Shape Modeling’13. She was a general co-chair for the Pacific Graphics’18 and Geometric Modeling and Processing’19 conferences. Dr. Sheffer had co-authored over 100 peer-reviewed publications, including 44 papers in ACM Transactions on Graphics, the topmost competitive CG venue; 22 of these were published in the last five years. She holds six recent patents on methods for sketch analysis and hexahedral mesh generation.